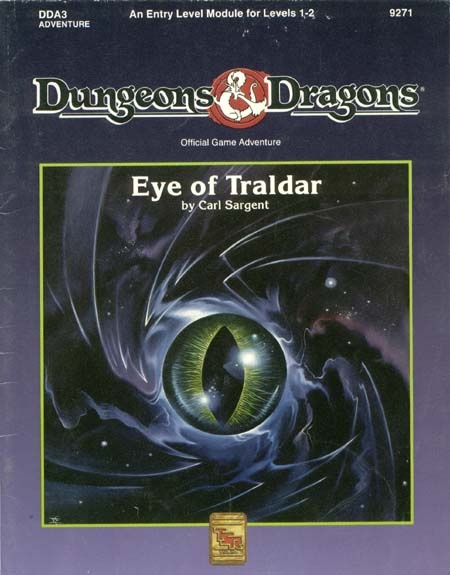 Mystara Modules and Placement by Andrew Theisen on Vaults of Pandius

DDA3: Eye of Traldar
Location: Fort Doom, Black Eagle Barony, Karameikos
Location Notes: The module is set explicitly in Karameikos, utilizes information from Gaz1, and expands upon same.
Time Period: 1000 AC, or anywhere between 970-1006 AC
Staging Suggestions: Like other modules in the DDA series, DDA3 is created to make use of and complement the materials of the Gaz line of products, and it would appear to be set in the same era. In any event, it needs to take place at some point during the reign of the Black Eagle Baron and before Duke Stephen proclaims himself king.
Continuity Problems: The module mentions that a man named Sverdlov is the Black Eagle’s new Court Wizard, which would seem to conflict with information from Gaz1 that Bargle is his Court Wizard. Suggestions are a) that the module is set prior to 1000 AC (a reference on p.17 stating that Karameikos was “only recently unified by Duke Stephen” would help to support this theory), and Sverdlov was a Court Wizard prior to Bargle, b) Ludwig has more than one Court Wizard, or c) this adventure is set sometime post-1000 AC but prior to 1006 AC and Bargle is for some reason out of favor in the Black Eagle’s court, though he later regains his position.
References: Gaz1 (p.58)

...Better make Sverdlov a cousin of Bargle [Was filling in for Bargle in DDA3 Eye of Traldar ]

Description: Several elven homesteads in the Achelos Woods have been attacked by raiding bands of goblinoids. Captured raiders wear symbols identifying them as agents of the nefarious wizard Bargle the Infamous. This information matches with rumours that Bargle was rounding up his old cronies in the region last year.

What This Means: It's not Bargle they're working for, but his not-quite-as-infamous cousin Sverdlov. Sverdlov has been trading in on Bargle's reputation for the past year and rallying hordes of goblinoids that were driven out of the Black Eagle Barony during the hin assault of 1010. He hopes to gain some measure of prestige in the region.

What the PCs Can Do: Bring Sverdlov and his hordes of ruffians to justice, of course.

*On extended loan from a secret Ally. [Servant of Nyx. Maybe the Lich King from here]

Been using Bargle's name to to gain some measure of prestige in the region [Bargle doesn't care. He is more than willing to let his cousin grow his Fame.] However, more importantly can deflect blame if caught or "blame" his cousin [Bargle still would not care. His legend will grow even greater.]

AC3/AC8 The Revenge of Rusak 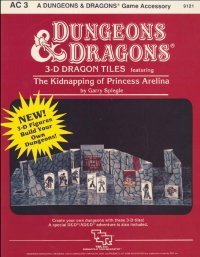 Princess Arelina: Arelina is the youngest daughter of King Limakhan. The Princess has grow into a hot tempered, commanding, and sharptongued woman. Last surviving member of the King's bloodline.

I thought an interesting twist would be Princess Arelina [in exile] could team up with Sverdlov. The PCs saved "Princess" Arelina but had to go on the run from the Warden and didn't want to help her "reclaim" her Kingdom at that time.

Sverdlov may have been captured before 1010 and the PC rewarded for their efforts. The twist is the Arelina's Rebel group saves Sverdlov from execution [She needs his help]. If need be a scroll is used to bring Sverdlov back to life [if PCs were killed him]. He will be made Court Mage and Main Advisor to the Future "Queen" Arelina.

Sverdlov's Ideas for retaking the Kingdom

-Intercepting caravans. Reduce supplies to the kingdom so that they have to start rationing.

-Intercept communications between the Warden and forge a new document with orders that lead mislead his troops.

-Make sure Nobles always have more rations and less for lower class [Sell some of stolen supplies to Noble Houses...building resentment].

-Loan Gold, Goods, even "Men" to select Nobles and Merchants Houses at a high interest rate.

-Spread seeds of rebellion through the lower class.

-Place a few Doppleganger in the Wardens troops.

-Try formally to get the Duke's assistance, [Most likely none]. Then have the the Princess declare her Kingdom independence and PCs Heroes of her Kingdom [at least the rebels].

-Princess converts and becomes a Priestess [Nyx or other Immortal: 1st level.]

-The Priestess will offer free food to the poor along with praise to Nyx and the Future of her father's kingdom.

-Start using undead in the area to the Priestess advantage.

The Princess Arelina [Soon to be Priestess] wants to restore the glory of her father's Kingdom, rebuild his Kingdom, and take care of the Warden.

Will the PCs help Princess Arelina?

-Even if they don't help. PCs will be publicly hailed as Heroes of the Princess Arelina's Rebels [Sverdlov's Idea to force the PCs Hands].

What will the PCs do about Sverdlov?

-Princess Arelina has pardoned Sverdlov for any past transactions [at least within her Kingdom].

Feel free to add your own twists and ideas.