The new Azcan priest of the new Micatle temple took several months to summon a large snake-like creature named Miquiztli (Death-head), to destroy the region. The Azcans close by the temple believed it was Miquiztli’s appearance which changed the world and wiped out all opponents, heralded the new world where day became night and night became fire, and then in this wake many were brought to their new world (in this Hollow World). After the creation and destruction of four worlds, the universe had exhausted itself. We Azcan live in the shadow of those real words; their echo, their chalk outline. In each of the four previous worlds, Azcan humanity was saved by the Immortals. Non Azcan were not: they are the living dead. After the destruction of the fourth world, it lay in darkness for fifty years, until Atzanteotl journeyed into Mictlan, (the Azcan hell), and reanimated the bones of the dead. In the four previous worlds, the sun was a living Immortal (Ixion also known as Otzitiotl). In ours, it’s a dead one. To build a new sun for this worn-out earth required a blood sacrifice: The Immortals gathered in the eternal darkness and created a fire, and their weakest deity, Nanahuatzin, a crippled god covered in sores, leapt into the center of the flames, and the red sun was born from its blood.

But it was a weak sun, and it wouldn’t move. All the other Immortals, one after another, immolated themselves in the fire to bring the dawn, but it was still not enough. The Red Sun needed more sacrifices; it needs ours. This is why we Azcan priests slaughter people by the hundreds, cutting out hearts and throwing corpses down the temple steps. This blood and murder is the only thing that keeps the sun reappearing behind the floating rocks; if we stop even for a day, it will go black and wither to nothing in the sky, and without its light the earth would harden and crack and fall apart. And this did happen lately. Only due the timely sacrifice of 5000 young men and women and 10.000 schattenalfen and other strangers did the sum finally reappear. And some day, this will happen again: With the death of the sun arthquakes will destroy us all, and when it crumbles there will be nothing left.

" This explains a few things", Said Jughyio to his scribe," for now we know the absurd killing spree maintained on the temple, that began with the recent darkening of the red sun". " Indeed mylord, it also explains why to them there do not exist other Immortals, as they all were used in creation of the sun". " Yes a very egotistical faith, for why would that Atzanteotl not jump in himself and keep the sun from dying. This way only he would survive and witness the destruction" "is it not THAT is what it desires?" "That might be so, That might be. Luckily we know all our Immortals ARE real, so this tale is nonsense". "indeed sir, yet it also explains why they think they need to be doning so". "Yes, that new faith crawling underneath the bloodcaked stairs....the Thousand Rabbits or something it was not?....that might be an interesting lead". "Yes Sir, ...but please, can we go now?" "Yes, I reactivate the Silence Spell, the Invisibility and Fly spells of our late friend are still active." "Pity they died Sir." "Yeah, although thir own fault, these temples are riddled with traps, they should not have meddled with these." "There is the Sun again Sir". "Fine, as soon as we are on the mainland we have to secure and then spread this knowledge. Maybe even to the other races, now slaugthered in this horrifying process." "Yes Sir, I hope the Empress will agree to this Sir"."It might...It might"...as they soared towards the sky. 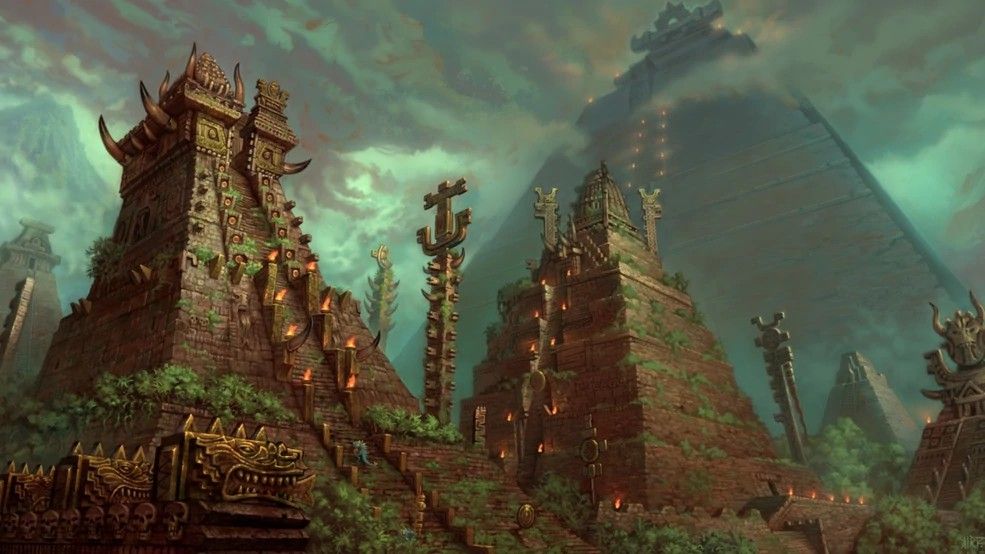 Below them, hidden in a corner an Azcan tried to focus up, yet saw nothing. "You are sure they found the message,... agent of Peyotlotzin?" "Yes I might be Invisible to Mortals, I saw them gong there, reading the words, and they are now flying through the clouds to their floating rock passing by high above." "And so we wait for Atruazin Quetzalcoatl, the master of all crafts, who will deliver us from the lies and illusions of Atzanteotl, that dark shadow of a winged serpent. Atruatzin will usher us in a new paradise in which we will live in peace and blessedness". "I do remember those words spoken earlier" "Yes as Fairy You might have been there...on the morrow of Naui makuilpouali sihtin...the fourhundred rabbits.....and now the day is slowly beginning, and we grow might""Yacumama is been seen and she is growing, soon to be able to swallow Atzanteotl whole"."It was foretold and should be right for a living snake to end this after an undead one had it begun." 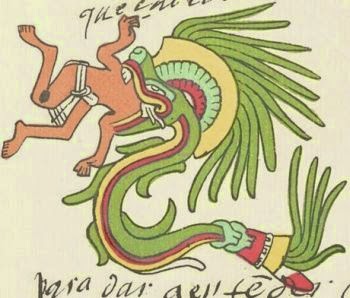 More on the four-hundred rabbits(Naui makuilpouali sihtin) see here; and in the HWR1 Sons of Azca Gazetteer
The darkening of the Red Sun (Imikis in chichiltik tonatiu) relates to the Nightwail trilogy adventure..all this happened about 1010AC/2010AY
Peyotlotzin is a fairy of the Hollow World detailes in HWR1 Sons of Azca Gazetteer
This whole text is placed just shortly after the Nightwail Trilogy adventure, and thus Alphatia is here a Floating continent with a revived Empress Eriadna as ruler.