Beholder Breeds on Mystara and their Cities

Mystaran beholders tend to be brown or green, and posses mottled skin. The distinctive patterns of the mottling define the particular breed. Currently 11 different breeds are recognized (by Beholders the other breeds other than their own breed are variant befouled monstrosities) on Mystara,;

It is possible a variant breed will develop somewhere else. All breeds tend to stay to their own part of the world, and new breeds must settle somewhere unclaimed by the other breeds yet. The O.t.M. Vulcanis (Travelled there by themselves) and the O.t.M. Alphaticus (placed there by the translocation of Alphatia 1009 AC) are currently the only two breeds found in the Hollow World, and their numbers are very low, they posses no cities and no more than 3 hives each) and the spell of preservation prevents the rise of new breeds unless travelled there. As expected there are conflict areas where the breeds claim territory or are reasonably near to other territories. With the demise of Alphatia in 1009 AC, the O.t.M. Vulcanis survived only on the other locations of the former Empire like Esterhold, Bellisaria, Norwold and the Northern Islands. They were driven from the Isle of Dawn, and are almost destroyed in Norwold. Esterhold can’t sustain them enough, and the Northern islands are too cold, to reproduce so this race will doom to extinction on the Outer world. 4 beholder cities have existed on Mystara, currently Kargash is the only active one.

Outside Mystara (Space and Planar) 25 other variant Beholder races are known to exist named after their planet or Plane (they are all Oculithorax tyrannis species), and these may have their own (Mostly up to 6) local breeds (the fourth name in line). A Beholder race of the Outer Plane Hades would be O.t.Hadesius, followed by the name of the breed.

Hive Mothers were first encountered by a matriarchal Elven society in the distant past (probably Norwold Elves just after the Rain of Fire 3000 BC). This Elven society assumed that the creatures were female because they led Beholder communities, and worshipped an Immortal called the Great Mother. Naturally, the elves named these creatures Hive Mothers. However, the Beholders’ own name for Hive Mother is Kawahak Kru, which translates more correctly as “Spawner-Boss”. Kawahak kru have no specific female traits. 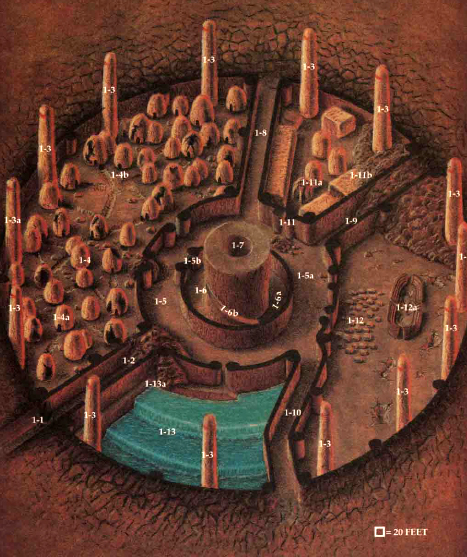 The city itself originates from a time long past, when beholders ruled both the surface and the depths and humans had only begun to appear in the area. Named illth Khinax in the beholder tongue (which means “Place of Spires”), the beautiful city (at least the beholders themselves considered it beautiful) was once a thriving population center with over 2000 beholders and beholder-kin dwelling there. Many of the other subterranean species knew of and marveled at its existence, and some even managed to establish peaceful (sort of) relations with the eye tyrants (through adopting a suitable obsequious attitude and thereby circumventing the beholder’s legendary xenophobia) and began to trade with them (the Modrigswerg are rumored in this, but all information about this trade is lost in time.) Still, the beholders were enemies of many races, and constant vengeance against invasion was a necessity. On more than one occasion other subterranean species attempted to attack Ilth K’hinax, either openly or through subtle infiltration. Some of the fallen warriors of the beholder enemies decorate the halls of the city to this day

In the end, the downfall of the city came, not from without, but from within. Factions within the society of the great city constantly opposed each other, plotting for power and prestige against one another. Ultimately, the conflicts became too openly militant to check, and a full-blown civil war ensued. Some factions were annihilated, others fled to safer havens, still others continued to war with one another in the channels and spires of Ilth K'hinax. In the end, one faction reigned supreme, but the glory of the great beholder city was but a memory. The other subterranean races, seeing their chance at revenge and domination, converged on the remaining eye tyrants and hunted them down. When all was said and done, the surviving citizens of Ilth K'hinax had scattered with the four winds, and the city lay silent and dark. No other species could comfortably live there without the inherent levitation ability of the beholders, so the place was abandoned by the sentient ones. The mindless monsters that the beholders once kept as pets and guards remained, multiplying and adapting or dying out completely (for escape was impossible for most of them). Ilth K'hinax lay dormant for hundreds of years, and the knowledge of its location became lost in the shrouds of time.

In the wilds beyond Ilth K'hinax, the legend of the city has been passed from generation to generation of beholder. It has become more a tale of myth and mystery than a simple set of facts, but the memory of the place remained, nonetheless. Many an elder orb or hive mother has dreamed of one day returning there to claim dominion over it, but none has ever attempted it, until now. Ixathinon began her quest to re-establish the throne of Ilth K'hinax over 150 years ago. No known routes existed to the Place of Spires, but she diligently researched for years, examining shreds of evidence from tales and records bought, stolen, or connived away from other subterranean races. Slowly, the hive mother began to construct a map that revealed a possible location of the fabled city. Her perseverance paid off; she was the first beholder to lay eyes on Ilth K'hinax in over a millennia.

Overjoyed, Ixathinon led her hive to the site and established a home them To this day the task of reclaiming the city from the ravages of time proved to be a long and arduous one, but slowly, the beholders are beginning to return the place to its former dory. Only a portion of Ilth K'hinax has been taken back; the rest will be restored in due time.A major obstacle stands in the restoration of Ilth K'hinax's former presence of humans and demihumans on the surface. Ixathinon knows too well the tale of the original downfall of Ilth K'hinax, and she has been convinced through her studies that it was a result of the citizens' interaction with and acceptance of the other races. It has become an obsession of hers that no other sentient species should be permitted to dwell in the vicinity of the great city; to do so only invites disaster once again. Thus it has come to pass that Ixathinon has devised a plan to eradicate the town of Cumbert and all of its inhabitants. Understanding the limitations of the military strength of her hive, Ixathinon realizes she could never hope to win an all-out war with the surface dwellers. To even attempt such a thing would not only deplete her valuable resources, but it would draw unwanted attention to the hive and its activities. Instead, by using a criminal organization called the Unblinking Eye, she has set in motion a scheme to subtly degrade the fabric of Cumbert's society hopefully leading to its eventual and ultimate corruption This plot has become the source of contention between the hive mother and the Beholder Qeqtoxi. Because of the great success of the Unblinking Eye, Qeqtoxi has come to enjoy the level of power it commands among the surface dwellers and is not so willing to surrender it to Ixathinon. It sees her plan to destroy Cumbert as foolish and a waste of potential resources, so the elder orb has decided to usurp her and take over the hive. If successful, Qeqtoxii will continue to build its power base within Cumbert and eventually spread its organization's influence farther a field.

This is where the Eye of Doom, Eye of Pain and Eye to Eye AD&D adventure trilogy begins.

Ash Phrax is the last lost underground beholder city. In many respects it resembles Illth Khinax, but all breeds corresponding to either city would be very insulted in this.

Ash Phrax is similar in one way, which is that it is located within a cave 500 miles deep within the ground, hidden deep under the surface of the Davanian continent. It may be similar to Illth Khinax, but the main difference is the floating middle city. This stone circular disk floats about 10 feet from the ceiling and about 30 feet from four carefully placed gravity-influencing poles that keep the disk in its position. The magic is so strong (and apparently almost not affected by the Day of Dread’s no magic effect, that it is assumed that the beholder goddess the Great Mother had something to do in creating this “artifact” city. This was apparently also the reason that both Davanian Beholder breeds decided to conquer the city. The battle was so immense that more than 1100 petrified beholders are currently discovered in the area. Some unknown force succeeded to control these petrified undead beholders (stats as normal Death Tyrant, but AV +3)), maybe it is the Doomsphere’s or something worse.

The city is now completely abandoned by any creatures, as at least 50 beholder ghosts seem to haunt the area. Neither beholder breed knows of this city anymore, and the only memory with the same name leads to an immense slaughter field. In fact this made so much impact that the word Ash Phrax means battlefield, or death field. No beholder would be interested in this city due to the hundreds of dead and undead beholders lurking there, uncontrollable, unlike Death Tyrants.

The abandoned Beholder city of Zelphim has recently been rediscovered and partially repopulated. as depicted in illustration on beholder cities

were are Beholders located of each breed and these 4 cities
keep in mind that Beholder borders do not follow any other borders.