This is all I have compiled (most of it I have used for the Construct chapter of my monster manual compilation) from all official sources and the internet.
Gargantua and Pantagruel 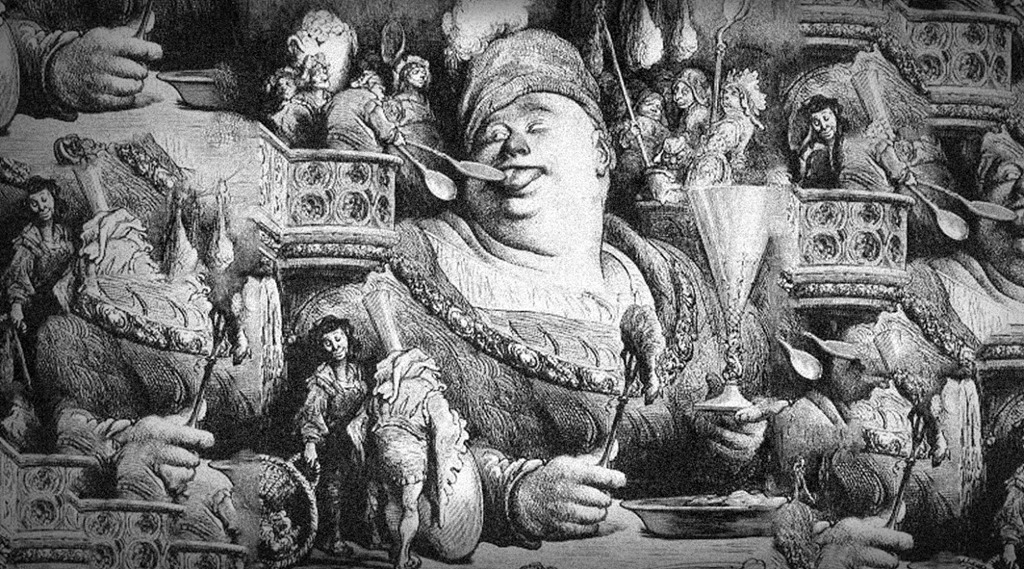 A gargantua is a very large variety of some other monster. A gargantua is the same type of monster as its smaller form, thus a gargantuan gargoyle is a construct, and a gargantuan troll is a giant humanoid, and so on. These monsters are extremely rare, the products of the mad wizard Gargantua, who used components from the gargantuan (a fish discovered and named by this wizard decades ago). The name gargantuan since then stands for enormous gigantic humongous creatures.

Gargantua himself is also enlarge, but due to its excessive weight no more able to move, and must be fed by his workmen. Since his own size increase, he no more created other gargantuan creatures, but he has already let many loose on the world. In his current state he is unable to become immortal, as he can’t complete the necessary tasks to achieve this goal.
Gargantua is a 30th level mage living somewhere in Norwold or another northern country. There are rumors that he already died due to his excessive weight, and inability to do anything.
Three examples of gargantuan creatures are given above, but more are rumored to exist. These biological construct are able to reproduce, if originally able to do so, but the chance to do find a fitting partner is nigh to nil. Only the carrion crawler seemed successful in it, and that is even extremely rare.
Because of their incredible size, gargantuas are noisy while moving, and cannot surprise anything. They also suffer a -4 penalty to their attack rolls when attacking man-size or smaller opponents.

The statistics for any gargantuan monster are calculated as per table.(if you need these for any of the species I can give them in excell tables, or you can wait till this chapter is released (really soon!!))
Beware; sometimes a truly big creature is called gargantuan, yet it is a normal creature, reproduces as normal, but is only a very large variant of existing species. This does not mean that it is a biological Construct. Example; Gargantuan spider. This spider is just a very very large spider.
These gargantuan creatures have been created anywhere between 942 AC and today 1016AC.
Gargantua are truly monstrous species, both in size and ferocity.
Due to their size they all suffer a -4 on their attack rolls versus any opponent smaller than medium (human) size.
These creatures are very noisy upon approach and as thus they can’t surprise any creature due to the sound and vibrations.
Endurance or Life duration. These creatures are in all aspects exactly equal to the creature they have been created from; as such their life would last as long as the original creature would. But since these creatures rarely sustain enough food, shelter, and are hunted, let alone all the other problems, their life would be lucky if it lasts up to 25% of the original creatures life.

Gargantuan Carrion Crawler (Segmentuus scavensus Gargantua)
These creatures (about a 1000 in number on Mystara) have slowly been reproducing and could become a new viable species in time. Their main difficulty is the acquisition of enough food. For the rest this creature is equal to the creature it was created from. It can’t reproduce with any other non-gargantuan Carrion Crawler of any kind. These gargantuan creatures have been created anywhere between 942 AC and today 1016AC.

Gargantuan Gargoyle* (Statua angula Gargantua)
About 325 if these constructs do exist on Mystara (spread over the whole planet, and some may have even entered the Hollow world.
For the rest this creature is equal to the creature it was created from. It can’t reproduce as any other gargoyle.
These gargantuan creatures have been created anywhere between 942 AC and today 1016AC.

Gargantuan Troll (Monstrum Imbecillus Gargantuas)
Gargantuan Troll’s don’t use boulder throwing any more(like the giant Trolls whence they've been created from), the may however slam with a local tree or alike, instead of claw attacks. The damage will then be 6d10 instead. Each of these giant attacks is able to break bones for each 5 hp damage sustained the character must make a constitution check at -4 or have a random bone broken. These creatures are very solitude (luckily for us) and no females (so far) have been created. Thus reproduction is stagnating. However, about 120 have been let loose on the world.
For the rest this creature is equal to the creature it was created from. It can’t reproduce with any other non-gargantuan Troll of any kind. These gargantuan creatures have been created anywhere between 942 AC and today 1016AC

Humanoid Gargantua (Hominoides Gargantua)
Humanoid gargantua are the least intelligent type. They resemble gigantic humans, somewhat anthropoid facially, with stooped shoulders, long arms, and jutting jaws. Long, greasy hair dangles about their shoulders, though a few humanoid gargantua are completely bald. They stand 80 to 100 feet tall and are sometimes covered with black, brown, or golden fur. Their skin color ranges from pale pink to dull yellow to deep black. They have blunt noses, huge ears, and bright eyes, which are usually brown or red. Single-eyed humanoid gargantua also are rumored to exist.
Humanoid gargantua have no language of their own, but because of their strong empathy with humans, they are able to comprehend short phrases of human languages 25% of the time. The movements and other actions of humanoid gargantua are typically accompanied by thunderous bellowing and grunting.
The creature attacks with its two fists for 4d10 hit points of damage each. It seldom uses weapons or tools, since its blunt fingers manipulate these objects with difficulty. However, reports exist of humanoid gargantua wielding trees like clubs. The creatures also can make trampling attacks on anyone (or anything) that comes underfoot, causing 10d10 points of damage. Humanoid gargantua regenerate hit points at the rate of 4 per round.
Like reptilian gargantua, humanoid gargantua possesses a simple empathy that enables them to sense the basic emotions and desires of others. Unless hungry, they tend to avoid creatures who intend them no harm, while actively seeking out and pursuing those with hostile intentions.
Humanoid gargantua live in valleys, in suitably sized caves in remote, jagged mountains, or on their own islands, far from civilized regions. They collect no treasure, spending most of their time eating and sleeping.
They live for several centuries, and mate for life. Once every hundred years or so as imagined, a female humanoid gargantua gives birth to 1-2 offspring. An immature humanoid gargantua should be about 20-30 feet tall. It has 8 HD (THAC0 13) and a movement rate of 150’/50’. Its fists inflict 1d10 points of damage each. It cannot make trampling attacks.
These monsters peacefully coexist with other creatures in their environment, but humanoid gargantua compete fiercely with rival gargantua, and violent conflicts often result. Many such conflicts continue until one of the gargantua is dead.
Humanoid gargantua eat all types of game and vegetation, preferring deer, bears, horses, and similar game.
These gargantuan creatures have been created anywhere between 942 AC and today 1016AC.

Insectoid Gargantua (Insecta gargantuan)
Adult insectoid gargantua resemble immense moths. Their bodies are covered with fine fur, usually gray or black, and their wings bear colorful patterns in brilliant blue, red, yellow, and green. Their movements and other actions are accompanied by a piercing screech that sounds like a warning siren.
The insectoid gargantua begins life as a gigantic egg, which hatches to reveal a gigantic larva. This larval form has 20 HD. As a larva, the insectoid gargantua can shoot a strand of cocoon silk to a range of 60 feet. This silk is exceptionally strong and sticky, adhering to whatever it hits. With this silken strand, the larva can entangle and immobilize victims. A strand can be severed in three ways: with 20 points of damage from an edged weapon, a successful strength check against ST 22, or by monsters of 10 HD or more.
The larval insectoid gargantua grows at a phenomenal rate, increasing 1 HD per week. Upon attaining 25 HD, the larva spins a cocoon and enters the pupal stage. It remains a pupa for 2d4 weeks, finally emerging as an immense moth with 30 HD. In this form, the creature can no longer spin silk. However, by flapping its wings, it can create a huge windstorm, 60 feet wide and extending 240 feet ahead. To remain safe, everyone and everything within the path of the storm must be solidly anchored (e.g., tied to a boulder). Unanchored victims must make a saving throw vs. death with a -4 penalty. Those who fail their saving throw are blown back 10 to 40 feet; suffering 1d6 hit points of damage for every 10 feet blown.
Insectoid gargantua establish lairs in the valleys and caverns of warm, mountainous regions. They live for several hundred years. Females lay a single egg every decade, but there is only a 20% chance that any given egg is fertile.
These mothlike creatures eat all types of game and vegetation. They prefer mulberry trees, and in just a few hours, a hungry insectoid gargantua can consume an entire grove of them.
The silk of insectoid gargantua larvae can be woven into cloth from which magical robes are created.
These gargantuan creatures have been created anywhere between 942 AC and today 1016AC.

Other Gargantuan Creatures
Other Gargantuan Creatures are till today unknown or it would be the rumor of a gargantuan Gorilla (Gorilla Gargantua) on some remote prehistoric island. But it is unconfirmed if the creature does at all exist, or who created it and why.
A possibility is that one of Gargantua's apprentices experimented with some stolen formulae from its master Gargantua on a secret and remote location, but even this is unconfirmed as even by magic the person can’t be found.
The creature is rumored to coexist with a primitive human tribe who addresses it as a god and give it accordingly regular sacrifices. However, they are afraid of this monster (and the other monster living on that part of the island that they erected a great wall to bar these creatures from coming to their side. These rumors seem to point to the Isle of Dread in the Sea of Dread. But no adventures ever have found traces of such a creature existing, though they did find primitive tribes and dinosaur creatures.
Whatever the truth, the creature does confirm to the standard statistics of gargantuan creatures.
These gargantuan creatures may have been created anywhere between 942 AC and today 1016AC.