This is a section of the map of Karameikos I work on. This is an area interesting enough to be revealed before the whole map is revealed. So this is a preview, A TEASER, if you want to call it that, and some changes may follow.
When the map itself is released this section will be listed seperately for those playing in the region and requiring a handy 1 mile hx map.

The arches (small red rectangle on map).
Always placed originally on roads. These arches are magical charged (by magical crystals embedded deep within the structure). All those passing underneath will become subject to a Know Alignment effect, where as white is lawful, and green is neutral and brown is Chaotic. The intensity of this color gives the ratio of Good (Lighter), Evil(Darker). This light wil appear on the creature passing underneath for 6 rounds.
The Fountains (small blue circle on map)
Mostly fed from underground channels, altitude gives height fountain. Mostly clogged somewhere. Original reason; Hutaakans introduced Hygiene to the Traldar culture. daily washing in 'blessed' water belonged to these. The water was not really blessed, yet the clean water washing was a blessing to those using it, as the number of disease afflicted dropped significantly within a single year.
The Shrines (small purple triangle on map).
Mostly placed originally along roads. These shrines are magically charged (but must mbe recharged monthly by religious rituals of the Hutaakan (under Pflarr) or Traldar Faith. The magic reveals the piety of a person attending the shrine (praying/studying/or else), by revealing a ring of energy around the person's top of head (an aura ring) visible to all. The immortal followed by the person is not revealed, only how pieous somebody is.this effects lasts 1 turn. All these have a small 10' x10' inner chamber with a basic stone font (the metal parts have been removed/stolen over the ages, so can't be used to make/store holy water) but mostly will contain some water used as holy water. there are mostly several small statuettes in niches to eitherside but the entrance. Any holy place was somewhat elevated from the ground and required at least 3 steps of stone to enter. they also were all rooffed to protect the contents from the weather.

Mnt Pavel
Source; KkoA, KkoA map, TM2, Joshuan's Almanac:
5800’ south of lost valley
Yarthmont 23, AC 1013: Adventurers announce their discovery of an extensive cave system near Mt. Pavel in the Black Peak Mountains in Karameikos. They invite investors to fund an expedition to thoroughly explore the cave system.
Named after Pavel Torenescu (KkoA 74 & Tales of the Torenescus by Allen P)born 953 AC reached The top of the Mountain 15 Yarthmont 970 AC In his Shearing he climbed this mountain (with a befriended orc, before this the mountain top was unnamed.

One of the most extraordinary humans is Pavel Torenescu, the first badass to summit Mount Pavel, and pioneer (literally) of modern Alpine climbing. This post can go no further without giving a nod to Pavel's legendary Help —Tenza Nurgling a friendly Orc of the Northern Wildlands—without whom, Pavel may not have stood a chance against Karameikos’s tallest mountain.
First attempted in 921AC by the Thyatian military, the formidable mountain had turned away at least ten major expeditions (not to mention two solo attempts—not recommended apparently) before reaching the summit. But in 950AC, the discovery of a southern approach to the mountain to the summit had been discovered.
In 952AC, the Thyatian Peras Swiss almost became the first ascender of the legendary mountain, also led by orc Tenza Nurgling, but were thwarted by weather and turned back less than 1000 feet from the summit. The following year, the Thyatians led an expedition behind leader Sir Jonah Hunter, with multiple teams capable of reaching the summit, in hopes to plant the Thyatian flag at the highest point. It was originally planned for another Thyatian to be the first ascender, but due to breathing problems and a slow pace, the expedition ended without a return.
Pavel, Always interested in the Thyatian exploits and climbing attempts, in his Shearing years with his trusty partner, the orc Tenza Nurgling (who was banished by the Thyatians for their failure) desired to be the first to summit, and beat the foul Thyatians in their plans. Having trained on the glaciated peaks of Mount Dread, Pavel was perfectly primed for the challenge, and his attention to detail in his remaining journal pages highlights just part of what it takes. (see below)
The yellow and red Trail is the Journey of Pavel Torenscu in reaching the limit of Mount Pavel (named after him thereafter). C# is the camp at night of that day. There are some broken land hexes, sections which are the result of the Earthquakes of 985AC, before that time these had been ridges(reddish brown mountain hex).

Day 1 - "We left the Town of Conyberry heading north into the trackless wilderness. The better part of the first day was spent climbing higher and higher into the Black Peak Mountains heading toward Mount Pavel. By the time we began to lose the light, the village was all but gone from view. We pressed as far as we dared with the waning light and made camp without incident. As difficult the trek had been so far, it would only get more difficult from here on."
Day 2 - Again we pressed on, higher and higher into the Mountains passing several ruins, former structures of some unknown civilization in ages past. As we moved through a particular pass that was flanked by the ruined foundations of towers. Someone had created these long ago.
As we continued higher into the mountains, the temperature continued to drop. Though not as cold as it would be in the coming months, it was cold enough to be uncomfortable.
Day3 to 8; We pressed on despite the climate and continued to follow Tenza Nurgling's directions. We lost # of our carries, Sir Lowell Fell down a cliff when his rope broke, Lewis Kartkra froze to death in the 4th night, and Sembra Pulchin forgot to time the Survival scroll, how long it would remain ctive,. when we finally heard him gasping for air, exhasted as we all were, it was too late. His heart stopped beating and no potion would help. Tenza Nurgling and I were the last remaining, and we had nothing more to lose, so we continued. With frozen fingers, blackened toes, and ears we went higher and higher.
Day 9; We had reached our objectory. We were on top of the Mountain. To the north an impressive mountain ridge going down to the Northeast. We could see nothing of the Foamfire Valley in that direction. Our last route north was extremely heavy, but when looking down to the south, the west ridge drooped away in broad curves. and we had a great view of the Foamfire valley in the east. It was dominant to the east looking considerably less difficult than our climb from the south. Never anyone had seen this. I noticed that the dawn approaches. Tenza Nurgling looked very wary, if not professionally to the 1000 feet rock decline in front of us. I shook hands to this orc, and he almost forgot himself to embrace me. It was quite a moment. Tenza Nurgling and I shook hands and he so far forgot himself as to embrace me. It was quite a moment! We took off our headgear and for a turn or so I commanded the artful quill drawing me and Tenza Nurgling holding the Torenescu and Traladaran flags, with behind us the various ridges of the mountain I named after myself and the general view. I left a holy symbol on top for for those we lost and Tenza Nurgling made a little hole in the snow and put in some food offerings, lollies and biscuits and chocolate. We ate a Mint Cake and then casted anew a scroll with Survival spell.. A little worried by the time remaing, we turned back from the peak into the eastern decent.
Day 10; The steps along the ridge made progress relatively easy. The only problem was the rock stability, which demanded another hard climbing session. At High noon we broke up on the east summit both extreme fatiqued. Wasting no time (for the survival scroll was also limted) getting down, we set of the great slope still in considerably trepidation about its safetyness. It was a great mental strain as was coming down fast. I repacked every step with great care, and everytime i needed to check our ropes, and climbing gear, most encouraging. After what seemed a lifetime the angle east of me lead down onto a narrow but stable and safe ridge. Initially to the drink water we camped here mometarily... then rather tired we continued our way down following mountain goat tracks and fullu exhausted collapsed at a hastily made camp for the night. Our original scrolls and provisions were now scandered, they had given us almost only 6 hours remaining. In the morning at the ridge camp we had a brew of Lemon and sugar then jacked up all our gear and we left the ridge camp.
Day 15; We reached Foamfire Valley. From here it was a hicking yourney of 3 days between marauding Gnolls anf Ghould to reach Threshold.
The Artful Qill pictures were the proof of ou accomplishments 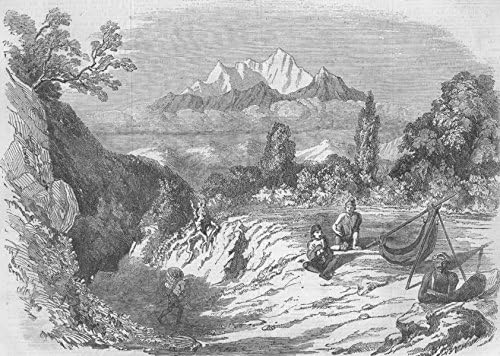 South of the Mountains with Mount Pavel in the distance. Our camp before the climb. 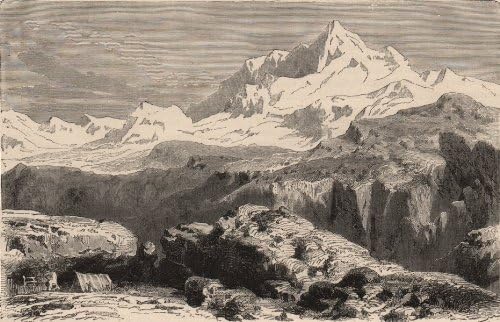 Halfway the climb. In the canyon in front of us we lost our carriers and a lot of equipment.

Myself on top of the very top. 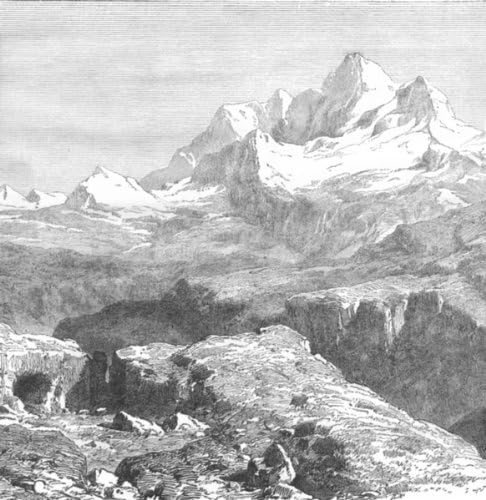 Pictures made by the Artful Quill, an invention of the Mage Teldon of the school of Magecraft in Specularum.(this quill makes a picture memorized upon visually by the user and etches this on a piece of clean paper/parchment at normal speed(1 to 4 hours depending on detail)

The last difficult section, about 20 hours from the summit, was appropriately named The Pavel step after Pavel, who was the first to traverse it. After the major earthquakes that occurred 985 AC, climbers reported that the Pavel Step is no more, the end of an era in modern alpine climbing, and a strong signal to Mystara's wonders and activity and its resulting impact.
Pavel's pioneering work at high altitude on Mount Pavel in 972AC dictated the framework for the climb's of all high mountains on Mystara. He demonstrated that a Create Air or Survival Spell was necessary to provide a boost to performance sufficient to climb obove 5500', and enable a safe return.
Lower amounts of oxygen at high altitudes caused severe corporal deterioration, as did Pavel's insistence on a very high fluid intake and the use of special spells to combat dehydration. Together with adequate protection from the cold, (which was less severe on the mountain than predicted), these strategies resulted in all future climbers who went above 5500 feet being in good physical and mental condition.

Free after the Journal of Edmund Hillary on Mount Everest.